What are Operators and Operator Precedence in C Language

The / operator performs integer division if both operands are integers and floating point division otherwise. For example:

This code prints out a floating point value since a is declared as type float, but a will be 3.0 because the code performed an integer division.

Operator precedence in C is also similar to that in Pascal. As in Pascal, parentheses control precedence. See tutorial 14 for more information on precedence, which becomes somewhat complicated in C once pointers are introduced.

C allows you to perform type conversions on the fly. You do this especially often when using pointers. Typecasting also occurs during the assignment operation for certain types. For example, in the code above, the integer value was automatically converted to a float.

You do typecasting in C by placing the type name in parentheses and putting it in front of the value you want to change. Thus, in the above code, replacing the line a=10/3; with a=(float)10/3; produces 3.33333 in a because 10 is converted to a floating point value before the division.

You declare named, user-defined types in C with the typedef statement. The following example shows a type that appears often in C code:

This code allows you to declare Boolean types in C programs.

If you do not like the word float” for real numbers, you can say:

and then later say:

You can place typedef statements anywhere in a C program as long as they come prior to their first use in the code. You do not have to group them together as in Pascal, and you need no special word to mark the beginning of the block as in Pascal.

Records in C and Pascal are very similar, as shown below. First, consider a Pascal record.

As shown here, whenever you want to create records of the type rec, you have to say struct rec. This line is very easy to forget, and you get many compiler errors because you absent-mindedly leave out the struct. You can compress the code into the form:

where the type declaration for rec and the variable r are declared in the same statement.

You access fields of records exactly as in Pascal, using a period (.), for example, r.a=5;.

You can declare a typedef for a record. For example, if you do not like saying struct rec r every time you want to declare a record, you can say:

and then declare records of type rec_type by saying:

You declare arrays by inserting an array size after a normal declaration, as shown below: 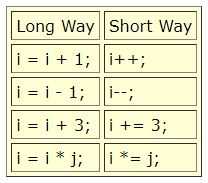