How to build your virtual workspace

Home » springboot » How to build your virtual workspace
springboot

In this tutorial we will see how to use Docker containers as a development workspace using a real word example.

What do we want to achieve?

One of the wonderful open source projects that I have got the opportunity to help in is the One Programming language . The goal of this project is to create a programming language named One. To build the project and run tests you must have a list of hard to install and configure dependencies on your machine, e.g. Make, LLVM, etc. Moreover, we wanted to make it easy for developers to get involved and contribute easily in the project. That’s why we considered having a docker image to build the code and run tests as priority. Hence, we created this beautiful image for our organization.

First things first, we need to build the image. Indeed there is nothing special in this section, because we will only write a Dockerfile for our image. Yet, what make this image special are the pieces of software that will include. Generally, you ought to setup packages required to run your project and your tests, along side with a version control system like git. As far as I am concerned, I included the following packages in my lightweight alpine base image:

Next setup the reaming packages, like LLVM and pre-commit. This last is a powerful framework for managing and maintaining multi-language pre-commit hooks. It is an important addition to your open source project. Since Git hook scripts are useful for identifying simple issues before submission to code review. We run our hooks on every commit to automatically point out issues in code such as missing semicolons, trailing whitespace, and debug statements. By pointing these issues out before code review, this allows a code reviewer to focus on the architecture of a change while not wasting time with trivial style nitpicks.

Now as everything is perfectly configured, you can copy your project directory, build the code, and run your tests while showing significant logs:

Deploy it to DockerHub

To do so, you will need a DockerHub account. Yet, only your account username and credentials are required. As we are going to deploy it using GitHub Actions. Similarly to pre-commit, using GitHub Actions, or any CI\CD tool is a good Dev Ops practice. Especially that we are going to configure our image to run pre-commit hooks, build the code, run tests, and deploy it the new image to DockerHub. In fact, you will do very minor changes to the following GitHub Workflow to use it in any other project.

Let’s begging by configuring the GitHub Workflow that will run on every push or pull request:

Next, we will add steps to configure needed GitHub Actions to deploy to DockerHub. Particularly, you won’t need any other GitHub Actions. Because, you already have a Dockerfile with all the prerequisites!

Don’t forget to configure cache so that you won’t need to go with all the unnecessary configuration steps everytime. Also, this will decrease the run time dramatically. In my case without cache the run time is about two hours, but with cache it often doesn’t surpass one minute and a half!

Consequently, you will cerate a Docker repository in your docker account.

Use it as a Workspace

In this section you will need to pull the docker image form DockerHube have VSCode with Remote-Containers installed: 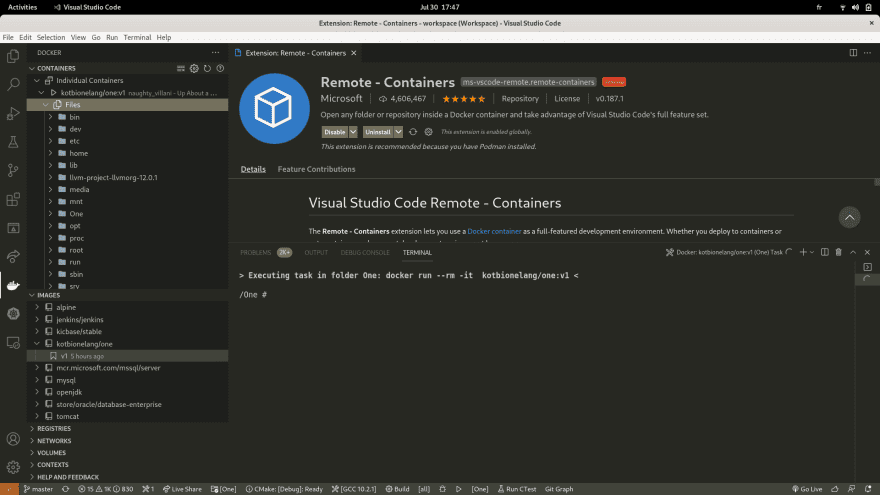 This awesome extension admit of getting into the Docker container itself, by opening a VSCode window inside it. 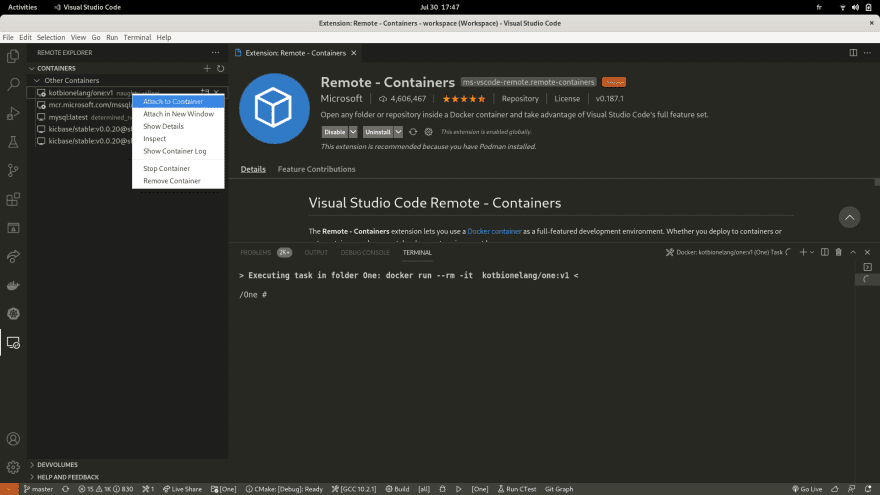 After Opening the new window attached to your container you can open the development directory:

And Here you go you have a workspace configured and ready to use! 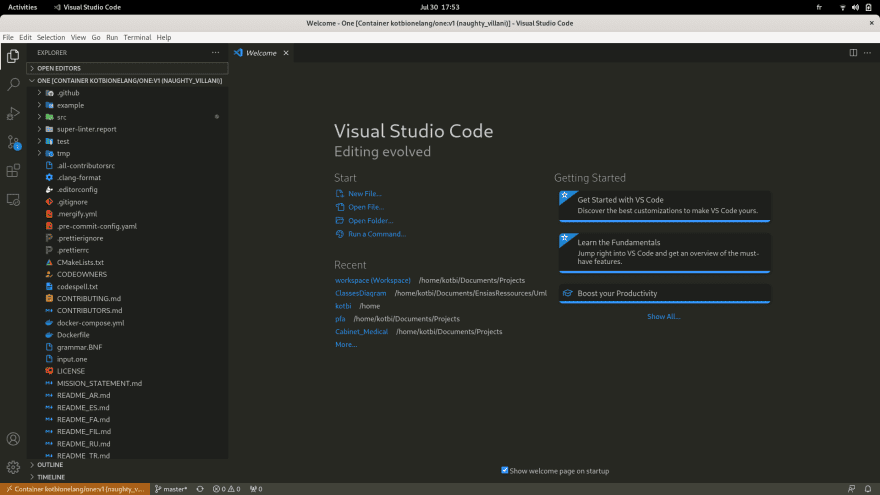 Now that you come to the end of this tutorial, you can see how important to use Docker, DockerHub, and GitHub Actions. As well as how easy to use are they. These technologies helps developers to be more productive and not bother with the repetitive configuration of the workspace. On every pull request, we get an updated Docker image with a clean code and successfully run tests thanks to pre-commit, Github Actions, and cache.