In this tutorial, we will learn how to estimate all possible java objects or primitives. This knowledge is critically important, especially for a production application. You might think that now most of the servers have enough memory that covers all possible application’s needs. Well, in some sort you are right — hardware, it’s pretty cheap compared to a developer’s salary. But still, it’s pretty easy to meet very consumable situations e.g.:

Sizes of Java Primitives is well known and provided from the box:

The minimal size of the memory word for 32 bit and 64 bit is 8 and 16 bytes respectively. Any smaller length is rounded by 8. During the calculation, we will consider both cases.

Due to the nature of memory (word size) structure, any memory is multiple of 8 and if it’s not the system will automatically add additional bytes (but the minimal size is still 8 and 16 bytes for 32/64 systems).

Java object has no fields inside and according to specification, it has only metadata called header. The Header contains two parts: Mark Word and Klass pointer.

In Java, everything is an Object except primitive and references (the last one is hidden). So all wrapper classes just wrap corresponding primitive type. So wrappers size in general = object header object + internal primitive field size + memory gap. The sizes of all primitive wrappers are shown in the next table:

Java Array is pretty similar to objects — they also differ for primitive and object values. The array contains headers, array length, and its cells (to primitive) or reference to its cells (for objects). For clarifying let’s draw an array of primitive integers and big integers (wrappers).

Array of Primitives (Integer in Our Case)

Array of Objects (Bit Integer in Our Case)

So as you can see the key difference between primitive and object arrays — additional layer with references. In this very example the reason for most memory loss — usage of an Integer wrapper which adds 12 extra bytes (3 times more than primitive!).

Now we know how to calculate Java Object, Java Primitive, and Java Primitive Wrapper and Arrays. Any class in Java is nothing but an object with a mix of all mentioned components:

But we have to consider that the Java String class has different implementations, but in general, the main size holds by char array.

How to Calculate Programmatically

The easiest way, but not reliable is to compare the difference between total and free memory after and before memory initialization:

The best way is to use Jol library written by Aleksey Shipilev. This solution will pleasantly surprise you with how easily we can investigate any object/primitive/array. In order to do it you need to add the next Maven dependency:

and feed to ClassLayout.parseInstance anything you want to estimate:

as output you will see:

As an option, you can use profilers (JProfiler, VM Visualizer, JConsole, etc.) in order to observe how much memory is consumed by this or another structure. But this solution is rather about profiling memory and not object structure. In the next paragraph, we will use JProfiler to confirm that our calculation is correct.

As a realistic example, we create classes that represent data from some database table with 5 columns and 1.000.000 records in each of them.

In order to confirm our calculation, we execute our code and attach JProfile to it. As an alternative, you can use any other profiler eg VisualVM (it’s free). If you never profiled your application, you can check this article. Here an example of how the profile screen looks like in JProfiler (it’s just an example not related to our implementation). 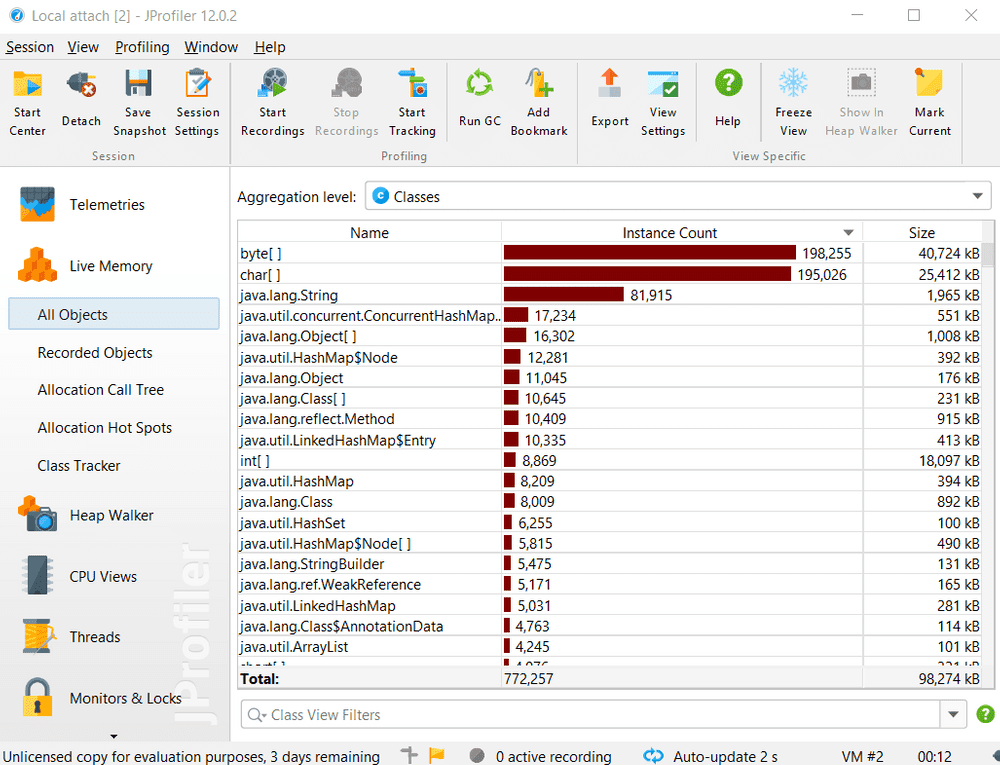 Tip: when you profile an app you can run GC from time to time to clean up unused objects. So the results of profiling: we have User[] reference points to 4M records and has a size of 4000KB. When we profile

As the next step we initialize objects and add them to our array (the name is unique UUID 36 length size):

Now let’s profile this app and confirm our expectations. You might mention that some values are not precise, e.g., Strings are 24.224 sizes instead of 24.000 but we count all String including internal JVM strings and the same related to Boolean.FALSE object (estimated to 16 bytes, but in profile, it’s 32 obviously because Boolean.TRUE is also used by JVM internally). 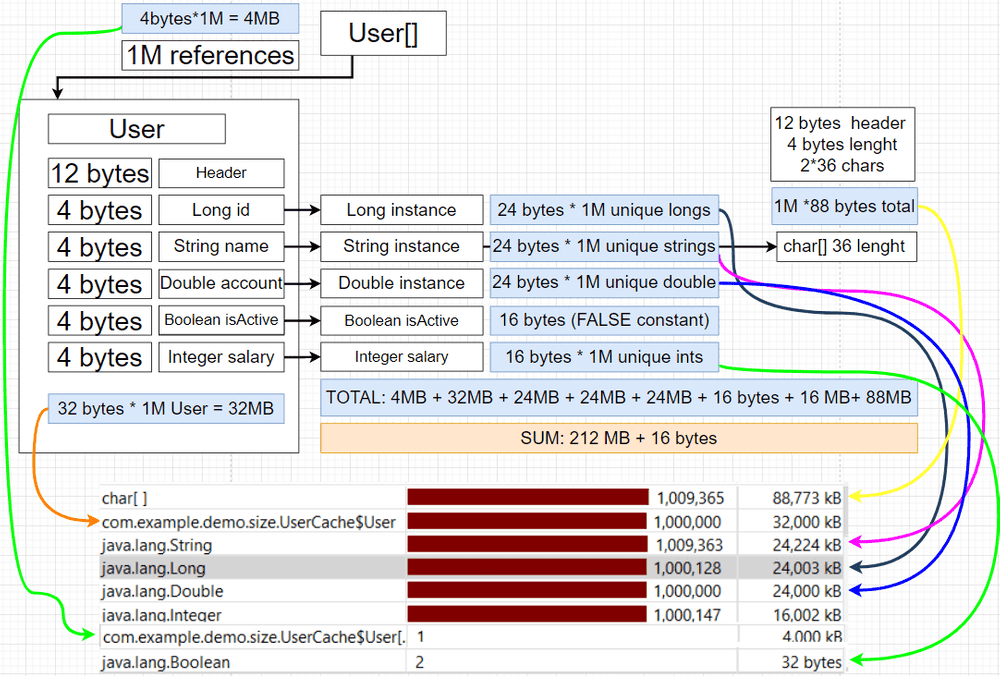 For 1M records, we spend 212MB and it’s only 5 fields and all string lengths are limited by 36 chars. So as you can see that objects are pretty greedy. Let’s improve the User object and replace all objects with primitives (well excepts String). 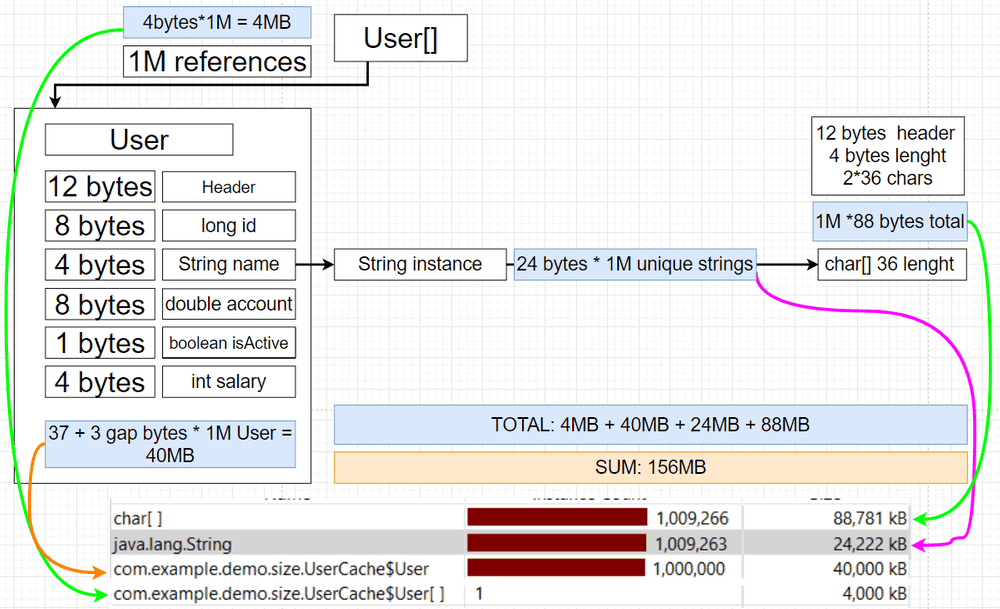 Just by changing fields to primitives, we saved 56MB (about 25% of used memory). But also we improved performance by removing additional references between the user and primitive.

How to Reduce Memory Consumption

Let’s list some simple ways to save your memory consumption:

Extract Data From A Child Object to Parent

If the design allows moving fields from child to parent class it might save some memory:

From previous examples, we saw how primitives wrappers waste a lot of memory. Primitive arrays are quite are not user friendly as the Java Collection interface. But there is an alternative: Trove, FastUtils, Eclipse Collection, etc. Let’s compare memory usage of simple ArrayList

Generally, the key difference is hidden in Double Primitive Wrapper objects, not in ArrayList or TDoubleArrayList structure. So simplifying the difference for 1M records:

And JProfiler confirms it:

So just by changing the collection we easily reduce consumption in 3 times. 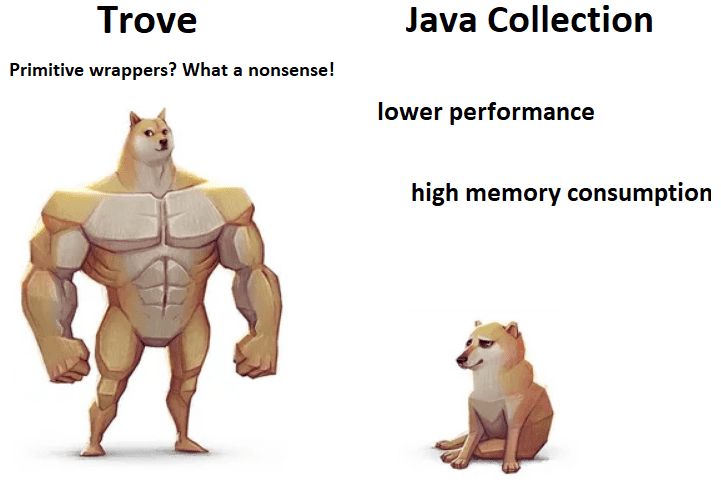 Is Oracle JDK Free again - for Java developersWhat is StringJoiner and its uses in Java 8 with an exampleWhat is the difference between “implements Runnable” vs “extends Thread” in JavaMySQL Backup/Restore in Windows, Linux and using Java ProgramHow to find the minimum or least value in an Integer List using Java 8