What is Mike Cohen's Test pyramid in Microservices

In this tutorial, we are going to learn about Mike Cohen’s Test pyramid in Microservices. 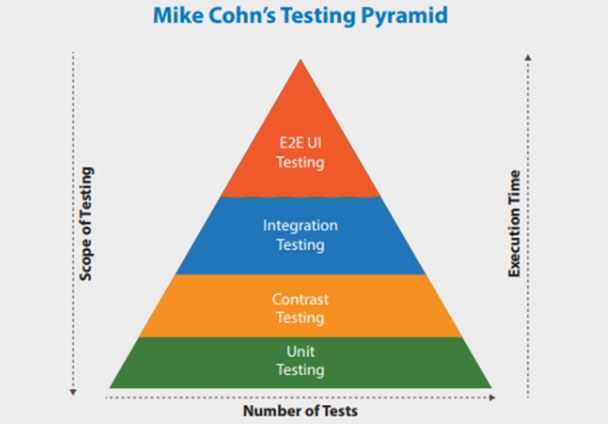 Regardless of the shared inverse relationship, microservices are tested with the following testing procedures:

Unit testing: Unit testing is preferably automated, although test automation entirely depends upon the development language and framework used in the microservice.

Contract testing: Contract testing treats every service independently while verifying their responses. This saves the other service containers from being affected in case one of the services under-performs.

Integration testing: Tests every service individually for performance. Service calls are made with integration to the external services that entail error and success cases. This method validates that the system is proficiently working and all the services are perfectly integrated.

End-to-end/E2E testing: E2E testing ensures that the process flows continuously with all services and database (DB) integration. The rigorous testing of operations ensures that the system works as a whole and can remain unaffected even if a component(s) becomes defunct.

UI/functional testing: Tests the application as it would be tested by the end-user. It gives the feeling of the user trying to interact with the system in real time.

What is a CDC or Consumer Defined Contract in MicroserviceHow to Download, Install and Change Password for Rabbit MQWhat is Spring Cloud Bus and why is it required in MicroservicesHow To Deploy a Spring Boot Application in DockerWhat is Zuul API Gateway in Microservice Architecture