Polymorphism, Overloading, and Overriding in Java and Object Oriented Programming

Polymorphism vs Overloading vs Overriding

Polymorphism is an object-oriented or OOP concept much like Abstraction, Encapsulation, or Inheritance which facilitates the use of the interface and allows Java program to take advantage of dynamic binding in Java. Polymorphism adds flexibility to your code which makes it more extensible and maintainable.

Polymorphism is also a way through which a Type can behave differently than expected based upon which kind of Object it is pointing. Overloading and overriding are two forms of Polymorphism available in Java. Both overloading and the overriding concept are applied to methods in Java.

Since Polymorphism literally means taking multiple forms, So even though you have the name of the method the same in the case of overloading and overriding, an actual method called can be any of those multiple methods with the same name.

Overriding is a form of polymorphism that is used in Java to dynamically bind the method from the subclass in response to a method call from a subclass object referenced by superclass type. Method overriding is bonded using dynamic binding in Java.

This allows programming for interface than implementation, a popular OOP design principle because Polymorphism guarantees to invoke the correct method based upon the object. Method overriding is key for many flexible design patterns in Java, like Strategy and State Design Patterns in Java. 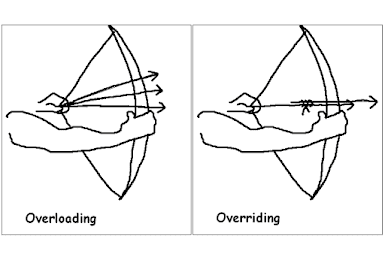 Method overloading is another form of Polymorphism though some people argue against that. In the case of overloading, you also got multiple methods with the same name but different method signatures but a call to correct method is resolved at compile time using static binding in Java.

An example of Polymorphism in Java

Difference between Polymorphism, Overloading and Overriding in Java with ExampleLet’s see a short example of Polymorphism in Java. In this example, the Pet variable behaves polymorphically because it can be either Cat or Dog. this is also an example of method overriding because the makeSound() method is overridden in subclass Dog and Cat.

Let’s test How the Polymorphism concept works in Java:

In Summary, you can not compare Polymorphism with method overloading or override. Polymorphism is the ability of a variable to behave differently based upon which kind of Object it is referring to. They are Java programming language’s way to implement polymorphism in language.

Which concurrent Queue implementation, should I use it in JavaWhat are Data Structures and its examplesHow exception handling effects the performance in JavaCan You Override Static Method in JavaFloat, Double and BigDecimal with Financial Calculation